My Sweet Canary, a documentary directed by Roy Sher, 2011 was a highlight of the ninth annual San Francisco Greek Film Festival. It not only traces the life of singer Roza Eshkanazi but also follows an international ensemble of musicians that publicly performs many of her songs in Turkish, Greek, and Ladino. 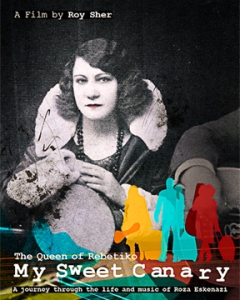 Roza Eshkanazi, born Sarah Skinazi around 1895 in the Ottoman capital, Constantinople, to a poor Sephardic Jewish family. Her father was a rag picker and her mother worked as a maid for a wealthy family. Roza never learned to read or write but enjoyed a long career as a singer and dancer of Rebetiko and other traditional music styles popular a century ago.

She can be compared to such legendary female singers as Uum Kalthum (Egypt), Edith Piaf (France), and Billie Holiday (USA). Rebetiko (often called Greek blues) was the urban, popular music of the underclass in Constantinople and most of the musicians who played it were from marginalized ethnic minorities.

Early on her family moved to Salonika, the second largest city in the Ottoman Empire. It became part of Greece in 1912. Before World War II, Sephardic Jews were the predominate population in the city. Less then five percent escaped deportation to Auschwitz.

A German military officer protected her and others during the Nazi Occupation. She narrowly escaped extermination after being reported by a Greek. She made a brief musical comeback before her death in 1980.

Even though I’m not a fan of Rebetiko, I thoroughly enjoyed My Sweet Canary, especially the contemporary renditions performed by Mehtap Demir, a Turkish singer and musician; Martha D. Lewis, a British-born Greek Cypriot; and Tomer Katz, an Israeli oud and bouzouki player. Their tour began in Istanbul and then moved to Thessaloniki before ending in Athens.