Last Friday I attended the first of two consecutive weekend engagements by Gerasimos Andreatos and Christos Papadopoulos at Hamam, a music venue at the site of a former Turkish bath in Athens. 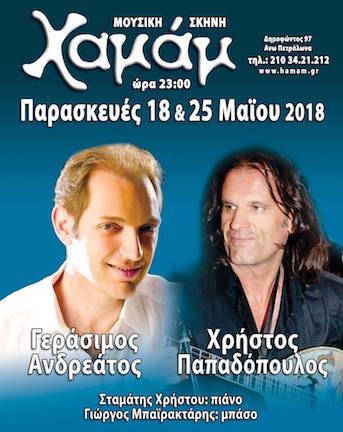 I arrived early enough to meet Andreatos, who’s a distant cousin, outside the club. He’s one of a couple of well-known Greek singers in the family, the other one being Elefteria Arvanitaki.
Hamam is an intimate environment, allowing the audience close contact with the performers on stage, which in this case totaled four.
The tables were occupied mostly by couples or groups of friends.
The show began at 11:00 PM and was scheduled to go until 4:00 AM, typical time for people who are used to partying late into the night.
However, I left after an hour and a half, concerned about public transportation only to approach the nearby station just as the last train was pulling in. I subsequently walked about fifteen blocks to the closest Metro with extended weekend service, making it home by 1:30 AM.
If you’re in Athens you can catch a repeat of the show at the same time and place.
For more information and reservations checkout the Hamam website or its Facebook page.
copyright © 2018 by N. A. Diaman, all rights reserved
www.nikosdiaman.com