Nono is a thirteen-year old boy with a vivid imagination who sets off on a journey to solve a mystery that haunts him.  The script is based on a popular novel by David Grossman. A delightful movie with wide appeal that includes an array of eccentric characters and picturesque locations including the French Riviera. While Nono (Thomas Simon) is definitely the lead character of this comic adventure film, a chanteuse named Lola Ciperola is played by Isabella Rossellini.

For more information and tickets contact San Francisco Jewish Film Festival, which this year runs from 25 July to 12 August 2013 at eight Bay Area venues including both the Grand Lake Theater and Piedmont Theater in Oakland.

A minor accident on the runway involving a luggage handler sets the mood for I’m So Excited directed by Pedro Almodovar (Spain) 2013. But the main action unfolds after the plane is in the air. Instead of proceeding from Madrid to Mexico City, the giant airliner is circling the country in search of an airport willing to authorize an emergency landing. 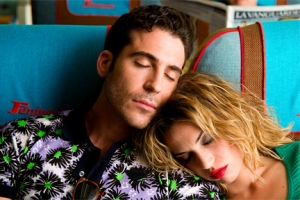 However, instead of the usual heightened terror, the director serves up a hilarious mix of alcohol and sexuality along with a bit of music and fancy choreography. Even the name of the airline is suggestive of a male body part.

Nimr, a Palestinian psychology student, meets Roy, an Israeli lawyer, in a Tel Aviv disco one night. The two handsome, young men are an obvious match in Out In The Dark directed by Michael Mayer (Israel) 2012.

Over time they develop a romantic relationship. But the political circumstances and continuing hostilities between Arabs and Jews threaten to tear them apart.

While Roy lives a relatively comfortable life as a discreet gay male in Tel Aviv, Nimr must remain totally closeted in Ramallah.

Their friend Mustafa, who flaunts his effeminacy, pays dearly for his behavior. The security forces that enforce the separation soon turn their attention to Nimr, who must run for his life with or without Roy’s help.

No one tells you what it means to be a good mother, muses a woman at the beginning of Melting Away directed by Doron Eran (Israel) 2011; I only asked after I lost him.

When Assaf’s parents discover he’s a cross-dresser, they lock him out of the house. However, four years later, after his father is hospitalized with terminal cancer, his mother hires a private detective to locate Assaf.

A subplot involves a young man living with his widowed mother. He and his partner are inseparable but he’s conflicted about coming out.

How these two mothers deal with difficult circumstances is an integral part of the work. Empathy and compassion are key qualities to any positive and healthy relationship.

Free Fall directed by Stephan Lacant (Germany) 2013 is about a romantic relationship that develops in a police academy between two male cadets. One man seems determined to break all the rules and to undermine the very foundation of the organization he’s a part of. Even risking the brutal reaction of colleagues within the ranks.

As the other man, Marc, struggles to understand himself, he can’t count on either of his parents for useful  guidance or emotional support. The mother is cold and distant, the father more willing to tolerate violence than accept deviance from provincial, conventional norms.

Both feature films were screened during Frameline 37, the 2013 San Francisco International LGBT Film Festival. Free Fall, my favorite feature at the festival, will be available on DVD at Wolf Video.