I visited Parc de Butte-Chaumont during my last week in Paris. What was once a quarry near Belleville was transformed into a beautiful green oasis for the working class by Baron Haussman during the reign of Napoleon III. Most of Nights With Theodore, directed by Sébastien Belbeder (France 2012), takes place there after dark. 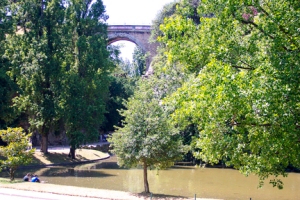 A series of nightly rendezvous in the park draw a young heterosexual couple closer together despite many unknown personal factors. What seems in the beginning a budding romance might actually be a growing obsession, especially when the nights in isolation overshadow normal daily routine. Theodore is part of a small group of people who gather four times a year to meditate above a subterranean room below the grass they claim provides them with energy needed for survival.

Ernest & Celestine, an animated feature directed by Stéphane Aubier and Vincent Patar (France 2012) is about an unlikely love story between a bear and a mouse that will delight both children and adults.

The 56th annual San Francisco International Film Festival runs 25 April to 9 May 2013. Included are more than three-dozen films produced or set in Croatia, France, Greece, Israel, Italy, Lebanon, and Spain. Most of these are dramatic features, a few are shorts, and three are documentaries. Programs will take place at eight venues in San Francisco and one in Berkeley.

Before Midnight directed by Richard Linklater, USA 2012 is set in Greece. This is a sequel to Before Sunrise, USA 1995. The new film screens Thursday 9 May 2013, 7:00 PM at the Castro Theatre followed by the closing night party 9:00 PM to 12:00 AM at Ruby Skye. Wednesday 8 May 2013 the director will take part in A Conversation With Richard Linklater 6:00 PM at the Sundance Kabuki Cinemas.

The Blue Zones (Second Edition) by Dan Buettner, National Geographic 2012 is a report about a world-wide study of centenarians: women and men over a hundred years of age. The author traces his travels to areas where there are a significant number of people that fall within that demographic. The newest edition includes two Mediterranean islands: Sardinia and Ikaria. 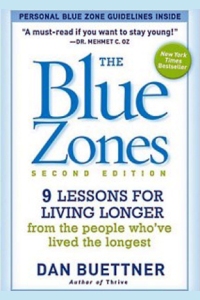 Ponce de Leon searched for a legendary Fountain of Youth but tailed to find it and there are a myriad of products and services promising to delay or reverse the aging process in humans. Buettner initially attempted to indentify a single factor but found a variety of possibilities among the people he met during his travels. In some cases there were contradictions between cultures he studied. In his summary he lists nine general principles.

The fundamental question underlying the research is, What does it mean to live a good life? There are dangers in succumbing to the extremes of material deprivation or overabundance. There are negative consequences to personal isolation and definite benefits of human engagement with others. Longevity is all about quality of life at every stage of development.

I ate twice seated on the terrace of Café Firenze (Italian) at Plaza San Antonio 2 overlooking the church. Both the potato and leek soup and the butternut squash soup were rich and delicious. The servings are relatively small at this upscale restaurant. A three-course comida one afternoon included salmon as the main course and a chocolate dessert with whipped cream and swirls of raspberry sauce. 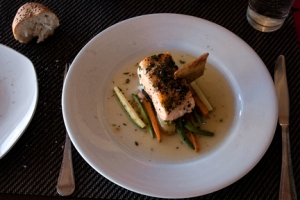 La Brasserie (French-Mexican) is open evenings at Jesus 11 and run by the daughter of the woman who has long-run Café de la Parroquia at the same location during the day. I had a wonderful fettuccini carbonara after disappointing versions of the dish at two other local restaurants.

Fenicia (Lebanese) at Zacateros 73 serves two skewers of chicken, mushrooms and green pepper with a warm onion salad, humus and pita. While the restaurant opens at noon, the afternoon I ate there the staff was late in arriving. However it was worth the short wait for the kitchen to get into gear.

Sylvia of Greece on Wheels delivers meals ordered by phone a day in advance. Natura, the organic grocery store on Ancha San Antonio, regularly stocks her homemade spanakopita and baklava; there are flyers at the front counter with full information about her service.