The Other Son directed by Lorraine Lévy, 2011 (France) was the centerpiece of the San Francisco Jewish Film Festival 32. The story begins when Joseph, the son of an Israeli couple, who is about to be inducted into military service, is discovered to have a different blood type than his parents. 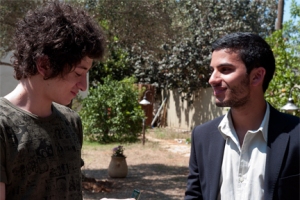 I was initially amused at the premise but soon became emotionally drawn into the difficult dilemma each character is forced to confront.

The Israeli-Palestinian conflict, that has generated decades of hate and violence, is explored from a more intimate perspective. The situation is beautifully handled by the director without sentimentality, melodrama, or sensationalism. And careful consideration was taken with the ending.

Of course, in real life it would take much longer for each individual to come to terms with the circumstances, and perhaps not all of them would have been able to overcome rigid cultural conditioning.

The Other Son is a wonderfully hopeful work that deserves wide and enthusiastic support both as cinematic art and as a generous affirmation of human possibility.

Romantic relationships are central concerns in many lives both on and off screen. Too often they are impacted by parental expectations. However an even more sensitive area involves the painful emotional history experienced by those who either feel ignored or unloved by the ones responsible for their birth and nurture. And of course, the Jewish family is legendary in this respect, so it isn’t surprising that several of the presentations at the San Francisco Jewish Film Festival 32 deal with this theme. 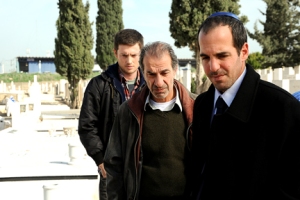 While Restoration directed by Joseph Madmony, 2011 (Israel) primarily focuses on the dilemma of a man trying to hold onto a business after the death of a long-time business partner, the tension between him and his son plays a significant factor in the drama that unfolds.

The restoration of antiques is marginal in a city and country where new factory-made products dominate the market. Is there even a place for such an occupation in a modern world where even his own son distances himself from the past, in anticipation of a more lucrative future direction? 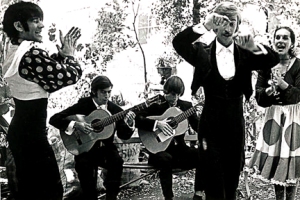 David Jones (aka David Serva) is a charming, handsome southern boy who quickly achieves fame in the 1970’s as a flamenco guitarist and all that comes with that traditional male role: drama, dislocation, and the predictable dissolute behavior.

The resolution sought by the director is illusive. The love-hate pattern continues to the present. There is little hope for positive change. But it’s a sad and fascinating portrait nonetheless.  I recognize the main character because I’ve known other tragic individuals like him.

Both films will be shown again at other Bay Area venues. For tickets and more information contact SFJFF.

When Snow Fell On The Lemon Tree Blossoms, by Leonidas Petrakis, Pella Publishing 2012 is a lyrical account of a difficult period in contemporary Greek history. While it’s presented as a fictional memoir, it might very well be based on the experiences of its author. 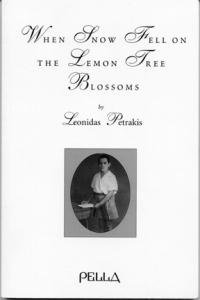 Greece was ruled by a dictator on the eve of World War II. During the 1940s the country was invaded by Italian, Bulgarian, German, and British forces. Both communist and fascist Greek guerillas fought against the harsh Nazi occupation. Afterwards the left and right engaged in a bitter civil war. However its political future was predetermined by British, American, and Russian leaders who made sure Greece remained within the Western block during the Cold War.

This book manages to describe the day-to-day difficulties facing the Greek people during that decade. Families divided by politics and differing loyalties. Some neighbors coming together to help one another and others exploiting the situation for personal gain.

I found the voice of the young narrator unconvincing. He sometimes spoke as a child, while at other times his words were clearly expressions of a mature adult. The work would have gained credibility if it were told by a man looking back at what occurred during an earlier time in his life. Allowing him to show the child he once was and also permitting him to reflect on his past experiences.

Why It’s Kicking Off Everywhere: The New Global Revolutions by BBC economics editor Paul Mason, Verso 2012 tracks the recent upheavals throughout the world. Millions of people recently took to the street protesting injustices. Tahrir Square in Cario. Syntagma in Athens. Unrest spread through several Arab countries and European capitals. Students, workers, and pensioners all joined in to protest harsh austerity measures while politicians and economists endlessly debated how best to preserve the assets of banks and multinational corporations. 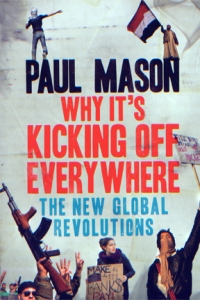 Paul Mason witnesses and reports from within and tries to make sense of it all. He interviews both the organizers and other participants. I admire his attempts to go to the source of those mass movements instead of remaining at a distance and spouting preconceived clichés. He records not only the words shouted but also includes the Twitter hashtags so that readers of his book can follow future developments in real time.

In some instances I gained a better understanding of the complaints from a journalistic perspective. But in the end I finished the book wanting more: a deeper exploration and a wiser evaluation of the situation. However, for that one must look elsewhere.